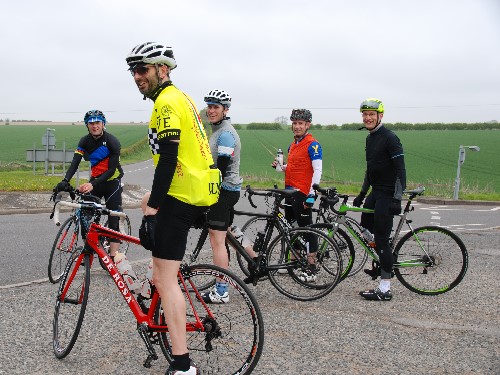 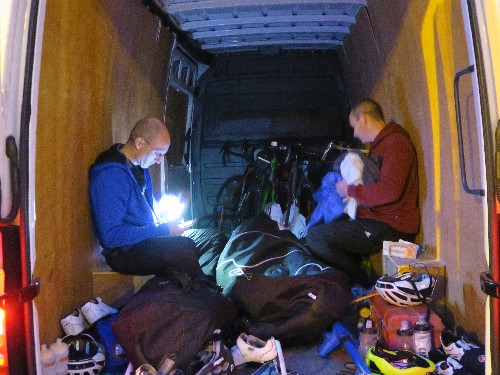 Reading my messages after a long day on the bike 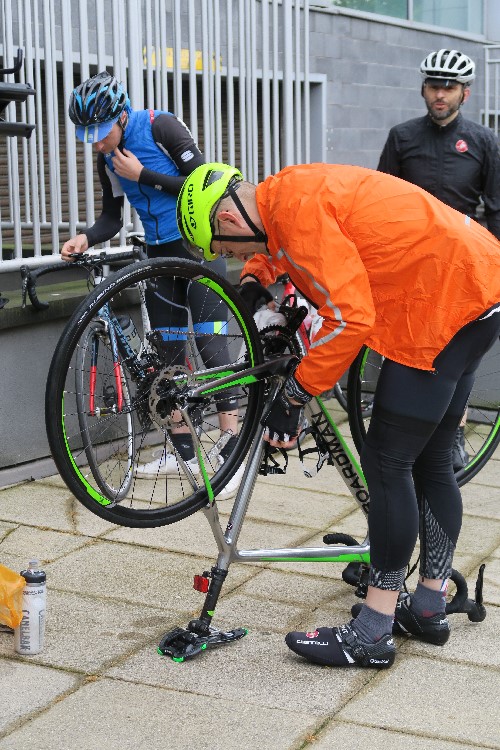 Doing a quick repair before setting off on another leg 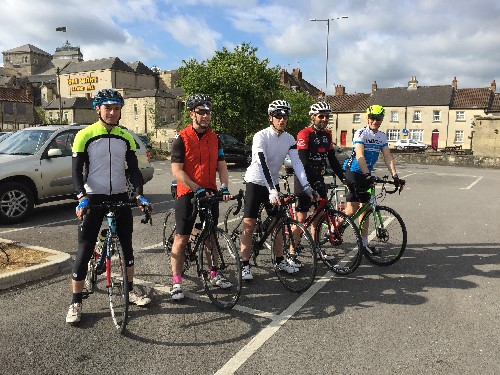 The gang, before heading off on Day 2 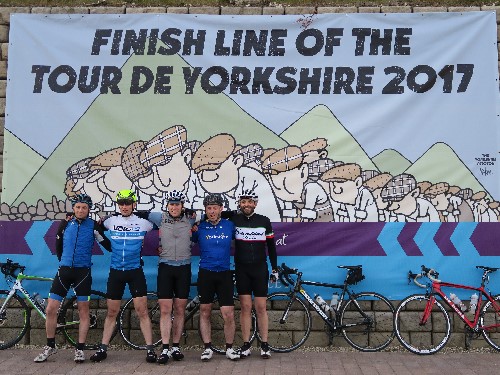 Celebrating at the finish line

B etween the 12th and 14th May 2017, I took a break from my 9000 mile challenge for Mind York to join a team of 5 cyclists from Callcredit to raise funds for Cancer Research UK. Our challenge was to ride the 2017 Tour de Yorkshire route. The following article was written by one of our team members, Remo Biagioni. 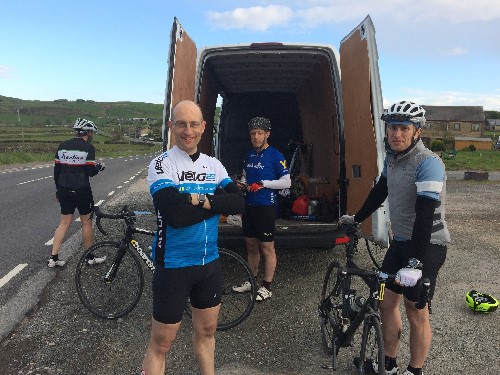 Pain is just nature’s way of reminding you that you’re not a twenty-five year old professional cyclist. Cobblestones, hills and corners are there to reinforce the point. Put all three together and you have Shibden Wall. Ride 250 miles before arriving at Shibden and you hurt. Nine hundred metres of cobblestones with an average 15% gradient – 25% on the corners – is nature’s way of explaining your limitations as a cyclist. Of the three hundred and twelve miles we rode over the weekend Shibden Wall was by far the hardest half mile. Alistair and Remo both ended up on the floor; Matt made some rather strange noises and, to our eyes at least, Mike and Ian glided gracefully to the top.

Our story, though, started a few months before that. We wanted to find a ride that would challenge us and raise money for Cancer Research. All of us have had friends and family suffer from cancer. Remo has lost good friends to cancer; Mike’s friend has recently been diagnosed and on his 3rd course of chemotherapy ; Matt’s father-in-law is a cancer survivor; Remo also lost an aunt over Easter after a long battle with brain cancer. The months of training are a small cost to pay to raise over £5,000 to support the efforts of doctors and scientists working against cancer. We owe a huge debt to everybody who supported us with sponsorship, our families for putting up with the time away from household chores and especially Pat and Eddie for following us around in a van ensuring we were never short of flapjacks or water. 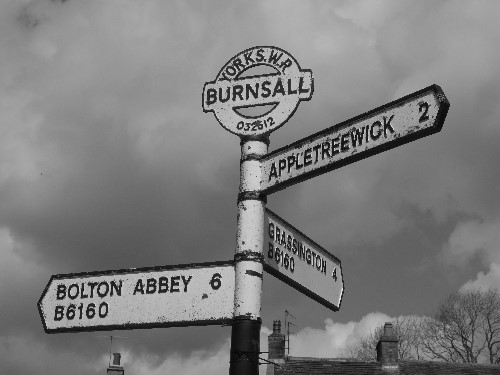 From Friday 12 April to Sunday 14 April we spent 21 hours and 19 minutes riding, climbing almost the height of Everest, burning 13,500 calories each – just under a week’s worth of food for most people. Friday was a long day. Leaving home at 6:00am to drive to Bridlington, we all made it home for around midnight. In between were 120 miles of glorious, coastal Yorkshire. Heading into the Wolds it was only a few miles before we put our first categorised climb under our belts. The weather was beautiful and the scenery was verdant. We headed through Malton and Pickering into Moors, the scenery turning from luscious green to windswept purple. Riding through the Moors is fantastic: almost abandoned roads, fast – very fast – descents followed by long climbs. We left the Moors into Whitby, cycled through the town centre, out past the abbey ruins towards Robin Hoods Bay stopping for some dinner 105 miles in. After our chilli and rice we were met with the Cote de Robin Hoods Bay described by Cycling Weekly as the “killer climb of the day, the showpiece”. Ian and Mike somehow overtook Remo twice on the climb presumably in an early attempt to break his spirit. Regrouping at the top of the hill we followed the fast rolling hills into Scarborough and the welcome site of Ian’s parents and the support van.

Waking up on Saturday morning was – difficult. None of us were quite on time to the start point including Ian after kick starting his system with three double espressos. Day 2 was the shortest of the three days with only one big climb. Leaving Tadcaster we set a reasonable pace through Boston Spa, Wetherby and into Knaresborough. The rolling road from Knaresborough to Ripley foreshadowed much of the days riding. Heading towards Pately Bridge the rolls in road started to get larger. From Pately Bridge we turned North dodging midges alongside the reservoir and towards Trapping Hill rechristened by the Tour De France as the Cote de Lofthouse. At two miles long with 15% slopes the hill gets your heart beating but rewards your effort with magnificent views over Nidderdale. Back to Harrogate its generally downhill. The road to Masham across the top of the dale is a joy to ride. From Masham we left our planned route as Mike’s ‘local knowledge’ had a better, quieter road to Grewelthorpe. Half way there Mike let slip he often cycles over from York to do this climb – not a sentiment that my legs were echoing! Heading towards Harrogate, ‘generally downhill’ meant that we spent most of our time cycling uphill; the course designers had done a good job of finding some steep hills with precious little respite between. After finishing we enjoyed a communal protein shake in Prologue, Harrogate’s dedicated cycling cafe. 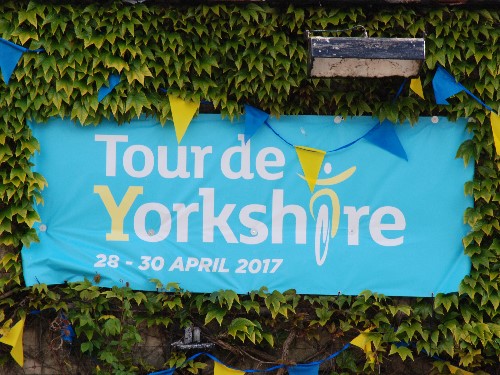 We’d all dreaded Day 3. We set off from Leeds through the damp morning streets before heading out into the Dales. We stopped in Burnsall for croissants: a civilised start to the day. Burnsall is a luscious, green village on the River Wharfe; the first of many villages we passed through on Day 2 worth a return visit. From Burnsall we headed South to Skipton, avoiding some of the major roads by taking a short ride by the side the canal – not something the professional peloton did! Single file on rough ground by a waterway doesn’t lend itself to racing. Headed into Silsden, caps, arm warmers, gilets were all removed and gels ingested preparing for the climb out of Silsden. The long, steep categorised climb gave us chance to practice our pain faces for when we really needed them: Shibden Wall. But the first cobbled climb of the day took us into Bronte-land. The many visitors walking the cobbled ascent into Haworth caused a few problems for two of our number. The other three, climbing at a more sedate pace, found fewer people in their path.

Over the course of the afternoon we skirted past Halifax and Huddersfield, met Alistair’s family at Honley and headed up – always up – towards Holmfirth which seemed a lot bigger than when Compo walked its streets. Climbing towards Penistone – just 3 more categorised climbs and twenty miles – the end of the ride seemed within reach. As we headed into those three climbs, Matt, after 290 miles, discovered his second wind shooting up the first and descending like a pro towards the bottom of the second. On the third, the final section of the final climb turned back on itself as the gradient increased. Even the mighty Mike’s pace dropped and a gasp of pain drifted down into the valley. Our last descent restored the usual order: Mike and Ian expressed concern they might have set off a speed camera while Remo, Matt and Alistair caught their breath. Turning left, following the signs to the finish, we rode the last few miles, as we’d left Bridlington: together. 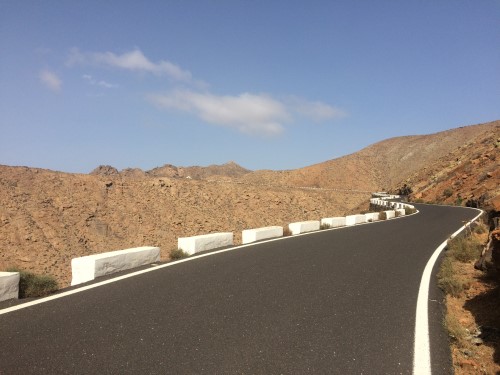